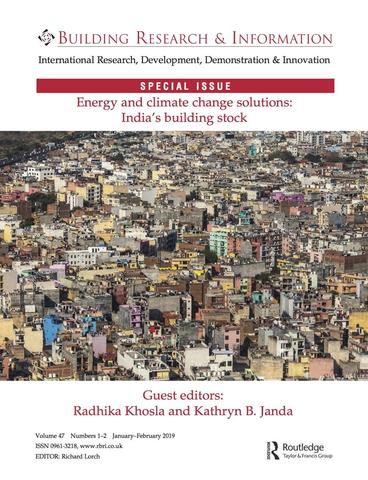 Radhika Khosla is the Research Director of the Oxford India Centre for Sustainable Development (Somerville College) and a Senior Researcher at the Smith School of Enterprise and Environment (School of Geography and the Environment) at the University of Oxford. She is currently a Visiting Scholar at the Centre for Advanced Study of India at the University of Pennsylvania. Radhika’s work examines the productive tensions between urban transitions, energy services and climate change, with a focus on developing country cities. Her research focuses on examining the socio-technical drivers and patterns of changing energy consumption in urbanizing cities, and the forms of governance that characterize urban responses to climate change in such rapidly developing cities. Radhika’s previous affiliations include the Centre for Policy Research, the Natural Resources Defense Council and the MIT Energy Initiative. She holds a PhD in the Geophysical Sciences from the University of Chicago and an undergraduate and master’s degrees in Physics from the University of Oxford.

Demand-side measures, such as urban energy management in households, are central to addressing global climate change. Examining and shaping energy consumption patterns is particularly salient in developing countries, where the bulk of urban growth is projected to occur, and which are often the most vulnerable to climate impacts. India, which is at the cusp of the largest urban transition predicted in history, is key to these discussions. Indian cities will host 200 million more people in newly constructed infrastructure by 2030, mostly starting from a low base of development. A combination of residential growth, development needs, rising incomes, and government policy to provide uninterrupted electricity, is projected to increase electricity consumption five to six times between 2014 and 2030, to create unprecedented urban energy demands. Based on surveys undertaken in 2016-17, this presentation examines transitioning electricity consumption patterns in urban housing in India. It discusses results from 5500 representative households in the National Capital Region. Alongside, it discusses results from the growing, yet often ignored, changing energy patterns in low-income housing. Quantitative analysis is complemented with qualitative research on the interactions between technologies, behaviours and institutions. Together, the presentation will discuss which electricity services are demanded as households urbanize, and how the ownership of appliances which provide these services is changing with the ability of households to consume more. Shedding light on these questions helps improve future demand and mitigation potential estimates to systematize research on urban climate solutions. It aims to inform policy measures to lock-in low-carbon development pathways at a scale that is relevant for India, and more broadly, for an adequate global urban response to climate change.