A Garden is a Solution that Leads to Other Solutions: Advocates as Catalysts 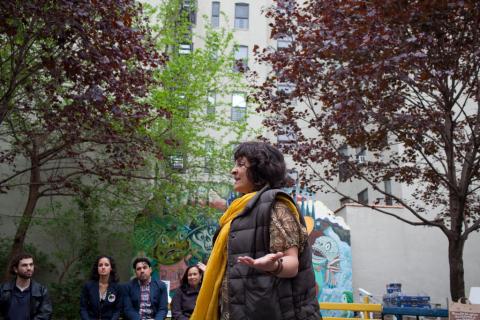 Paula Segal is the founding director of 596 Acres. She ran the project from 2011 to 2016. 596 Acres has facilitated the creation of 39 new and community growing spaces in NYC since 2011. It played a key role in the the preservation of dozens of others and is actively involved in current campaigns to transform vacant public land into community resources, to build long-promised public open spaces, to defend gardens owned by not for profit organizations from tax lien foreclosure and to preserve community spaces in the face of deed theft. To facilitate understanding of land ownership that can lead to action, 596 Acres built an online tool, livinglotsnyc.org which has been adapted and adopted for use by advocates in cities internationally (GroundedInPhilly.org, http://www.heritagemontreal.org/en/h-mtl-platform/ and http://www.land… Melbourne, Australia). In 2017, Ms. Segal shifted into an advisory role with 596 Acres and joined the Community Development Project (CDP) of the Urban Justice Center as a Senior Staff Attorney in its Neighborhood Change practice. At CDP, she supports 596 Acres and other CDP partners who seek to vest control of neighborhood change in communities rooted in our neighborhoods. She is an Ashoka Fellow recognized for building the field of community land access advocacy and for her leadership in shifting the legal profession towards creating opportunities for everyone to be a change-maker.