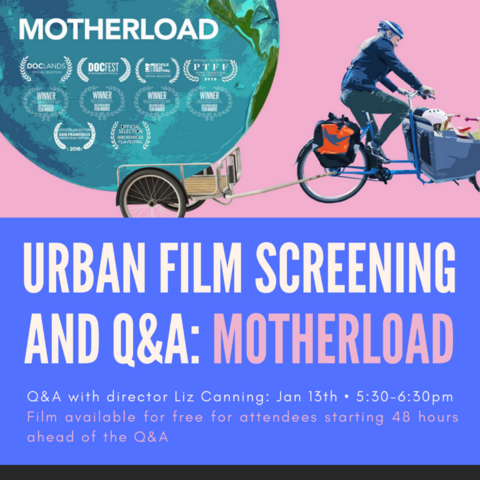 Location:
Zoom See map
205 Prospect St.
New Haven, CT 06511
Click here to register.
Contact email:
anna.pickett@yale.edu
Join us for a Q&A with the Director, Liz Canning!
The film will be available for free to attendees 48 hours ahead of this Q&A. Registration required. This event is free and open to the public.
MOTHERLOAD is a crowdsourced documentary exploring our cultural shift toward isolation and disconnection, how this may affect our future, and whether the cargo bike could be an antidote. MOTHERLOAD not only describes how the earliest bicycles facilitated women’s fight for the vote and made the poor mobile, but also shows how 21st century bicycles are empowering mothers, families, communities and advocacy networks all over the world. A central point of the film is that we cannot fight for social justice, climate justice or much of anything unless we first resist the cultural shift toward isolation and disconnection. Bicycles connect people with their own bodies, environments and communities, clarifying and aiding in the protection of what is most important. Check out the trailer for the film here: <https://vimeo.com/ondemand/motherloadpg/408201711>.
Liz Canning, Director/Producer/Editor/Animator
Liz’s work has screened internationally, winning awards including a Sundance Special Jury Prize (American Blackout - editor/producer). After graduating from Brown University in Semiotics, Liz worked at San Francisco’s Artists Television Access and Film Arts Foundation while making films. Her award-winning Handmirror/Brushset Included screened internationally, on PBS and at the Museum of Modern Art in NYC (distributed by Art Com). Since 2000, Liz has worked as a professional filmmaker focused on editing and animation for documentaries. Girls Rock! secured theatrical distribution and featured five animated sequences created by Liz and to demonstrate the cultural forces affecting young girls.
The Yale School of the Environment’s Urban Learning Community, along with the Hixon Center for Urban Ecology as well as the Climate Change and People, Equity, and the Environment Learning Communities, invite you to a virtual film screening of Motherload, “a crowdsourced documentary in which the cargo bicycle becomes a vehicle for exploring motherhood in this digital age of climate change.”
Register today.