The Science of Litter 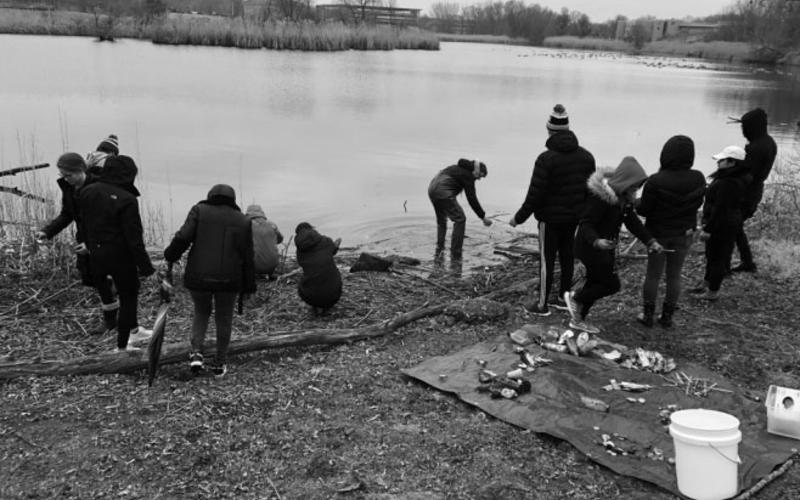 Walking around Beaver Ponds Park with longtime URI board member Nan Bartow is like getting a tour of her personal garden—she is that intimately knowledgeable about this 109-acre parcel of forest and water near her home, bounded by Southern Connecticut State University, Newhallville, and her neighborhood of Beaver Hills.

During a recent walkabout on one of the rare cold days this winter season, Nan and I passed through a diverse wooded area, following a path that connected the two ponds. She showed me the three biggest of the eight outfalls that bring water into the ponds from surrounding areas—and with the water comes lots of litter. Cleaning up that litter is the focus of a new collaboration between Yale’s School of Forestry and Environmental Studies, SCSU, Urban Resources Initiative, and the City of New Haven.

“There are many underground springs that keep this water going all summer, even in a big long drought,” Nan says, “but also we get a lot of water from rainfall and a lot from the streets, which is our big problem. It has many impurities, like salt and oil, and some people think the sewer grates are where you can pour stuff into.” Nan’s late partner, Bill Bidwell, first came up with the idea of collecting and categorizing all the trash as a step toward understanding where it originated and thereby suggesting ways to prevent the problem. He made piles of like materials, including tobacco products, drug paraphernalia, juice and liquor bottles, wrappers, Styrofoam, and more.

“It’s one of the key aquatic, open-space areas in the city,” says Yale forestry professor Gaboury (Gabe) Benoit. The school’s incoming masters students all participate in hands-on summer modules, and one is this study of litter in the ponds. For the past three years Benoit’s students have been doing an exercise where they measure plots between one and eight square meters, collect all the trash in the plot, and categorize it. “We found that some of the litter has dates on it, like freshness dates, and it turns out that with very few exceptions it’s new stuff, and that made us think if we could stop the supply, after a few years there wouldn’t be any litter anymore and people wouldn’t have to go in every year and clean it up. So, it’s litter control, but it’s also a research project.” Funded with a grant from the Long Island Sound Future Fund, the project is relevant because much of the trash, if not removed from the ponds, eventually ends up in Long Island Sound.

Benoit notes that the three biggest outfalls drain 79% of the 1,252 acres that form the drainage area of the park, an area that is completely developed with almost no open space. Those outfalls are the ones that will be fitted with three different methods of catching the litter: a big net bag shaped like a sock attached to the outfall, a floating boom set up a few feet from the outfall, and a chain link fence.

In the fall of 2013 the Department of Parks, Recreation and Trees removed a portion of a chain link fence along Sherman Parkway, which had prevented illegal dumping but unfortunately also blocked community access. Over the next six months, URI’s GreenSkills crew planted 48 trees to improve habitat and aesthetics, and to discourage drivers from pulling into the area. The Department of Parks also added boulders to further prevent vehicle access and deter dumping.

The recent removal of the police firing range from Sherman Parkway created an opportunity for the Parks Department to clear away the rest of the fence, completely overgrown with invasive vegetation, and transform the area formerly considered dangerous due to the sound of gunfire. This was especially important because that physical and psychological barrier into Beaver Ponds Park was closest to Newhallville, which has very limited open space other than this park. In place of the fence, URI has installed a tenthof-a-mile accessible stone-dust nature trail adjacent to the Newhallville community. Next, URI will lead the uprooting of problematic invasive species in an area of three-quarters of an acre, as well as plantings of new trees with our GreenSkills teams.

Steve Brady teaches an Intro Ecology course at Southern to 16 students each semester. He has a degree from Yale’s Forestry School, and he remembers fondly, “One of the first things we did was the three-week module with an urban ecology, environmental justice focus.” That’s where he met Benoit and URI Director Colleen Murphy-Dunning, and he said he’s delighted to be teaming up with them again for this project.

He and his students work “on the biological side of it—how the urban environment affects the critters who live in streams in particular— including water quality in the pond [the one nearer Southern], downstream of the pond, and some streams and ponds nearby for comparison. We look at the community of bugs that live in streams—these macro invertebrates are really responsive to changes in environment—and use a score to determine water quality, in terms of salt and other runoff contaminants, and how that affects the oxygen level and tying that altogether with the litter side and seeing if there’s any difference before and after the litter mitigation when the traps get put in.” He adds that the project will help students understand how watersheds work, since litter is being transported to the ponds from the entire watershed. Conveniently, the park is a 10-minute walk from their classroom.

Professor Brady’s SCSU students are doing the same exercise [as Yale students] of gathering litter, weighing it and classifying it. He says they’re surprised by the amount of litter that collects and are motivated to do something about it. “We go out one week and collect it, and then two weeks later it looks like we didn’t even touch it.”

He said he hopes through the project to promote interaction between Yale and Southern students, who, after all, have a lot in common and can all contribute to improving their collective future.