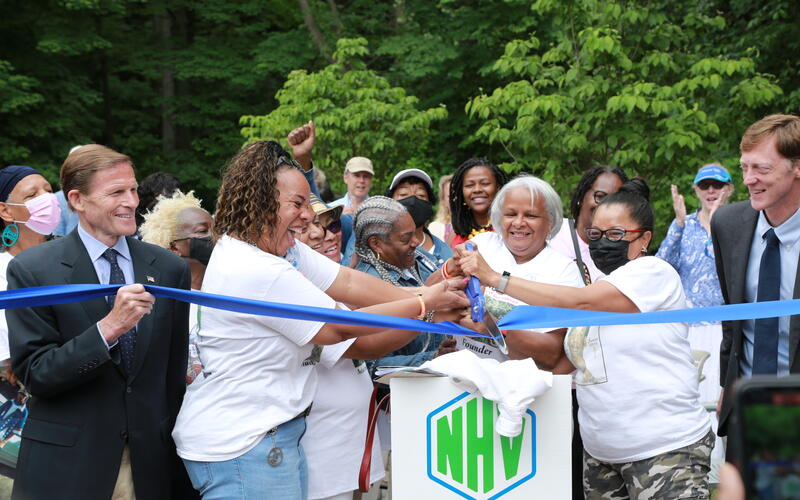 At the dedication on June 12, the mothers’ group leading this project cut the ribbon and welcomed hundreds into the new space. From left: Senator Richard Blumenthal, Celeste Robinson-Fulcher, Pamela Jaynez, Damonne Jones, Helena Moore, Marlene Miller Pratt, Allison Deroche, and Mayor Justin Elicker.
Tucked between the West River and Valley Street is the New Haven Botanical Garden of Healing Dedicated to Victims of Gun Violence, a place filled with flowers and light which connects the city to its river, and to the growing power of the land. It is a space to remember those who have been lost to the cycles of violence driven by injustice in our society, and to confront that injustice with the growing power of life and beauty. It came as a result of years of work by a dedicated group of New Haven mothers, led by Marlene Miller Pratt in partnership with the City of New Haven and URI.
On June 12, 2021, the garden was formally dedicated in a stirring event attended by approximately 300 members of the New Haven community who have lost loved ones to gun violence. Many wore shirts which bore the names and photographs of those they had lost. The ceremony centered on the reading of names of nearly 700 New Haven victims. Family members read the names of those they had lost, and were joined by Mayor Justin Elicker, Alder Richard Furlow, and U.S. Senator Richard Blumenthal. Miller Pratt stood in front of the large group in the warm sun and reminded families that they owned the park. It was their community who created the garden and established it as a place of healing open to all.
This fall, Marlene, along with two other mothers, Celeste Robinson-Fulcher and Pamela Jaynez, visited the first-year student orientations at the Yale School of the Environment (YSE). They shared their stories of living and working to heal after losing children to gun violence, and the drive to create a place of remembrance and community. Weeks later, as the hollies and mountain laurels danced in the morning breeze, over 40 YSE students arrived with a team from URI to volunteer: pulling weeds, shoveling mulch, and planting trees to maintain and expand the garden.
Volunteers walk gently on the brick-lined pathway through the garden; the bricks are inscribed with the names of those who have been lost. Asked what they feel when they come to the garden, Marlene and other community members such as Damonne Jones spoke of serenity and peace, of working and feeling close to the earth.
YSE student Epongue Ekille was touched by the stories the mothers told and the resonance with challenges in her home city of Rochester. She spoke of the power of service in confronting feelings of helplessness when facing ongoing structural issues. She was invigorated by the sun and the joy of working in a large group to accomplish a shared goal.
This fall, nine more bricks were installed on October 2, and now 23 people have been lost this year already in New Haven. There are many facets of confronting a problem as devastating as gun violence in American cities, and public memorials and gathering places are just one avenue toward building communities that support the lives of all residents. That is the duality of healing that the space represents—the need for healing means that the pain exists, but might be overcome.
The mothers’ group, in collaboration with URI, have held work groups on Saturdays all through the spring, summer, and fall at the garden, and community members from across New Haven have shown up to contribute to the work, including students from James Hillhouse High School, Southern Connecticut State University, Albertus Magnus College, and throughout the Yale community.
Yale graduate student Gabe LePage had worked with the mothers as a URI intern during the summer of 2020 and become deeply connected to the project. This fall he organized a coalition from several New Haven churches to support the project. He spoke of the need for institutions like schools and churches to become aware of, and sensitive to, issues of violence in the community, “To see the names of the people on the bricks and see the magnitude of the problem is really powerful, it speaks to voters, to policy leaders, helping communicate the immensity of the problem, and it also speaks to people who might otherwise be involved in gun violence, to see the cost.” For LePage, the garden represents a physical space to tell the story, “To have that grief not be hidden, but be caught up in a place that’s beautiful, I think there’s a healing in that.”
Marlene feels immensely supported by the work that students and community members are doing in the park, and she wants to see more involvement in the future, not only in planting and weeding but also in mentoring New Haven youth. “I just wish I could see more of the families here,” said Miller Pratt “because if they gave back, oh my God, they just don’t know the healing. I know I’ve healed because this is something I did for my son, not just for my son but for every other parent in New Haven. It feels good knowing that my son is not forgotten.”
The park belongs to all who have lost someone, and all who have invested their labor in bringing it to life.
For updates on this unfolding creation, visit the Botanical Garden of Healing’s webpage.