Over the past year, URI, in collaboration with the Yale Hixon Center for Urban Ecology, has expanded its work on rain gardens, also called bioswales, to include the construction of seven new installations on Daisy Street and Watson Street in the Newhallville neighborhood of New Haven. Bioswales are essentially gardens that are optimized for stormwater retention and planted in the strip between the street and the sidewalk. The Newhallville implementation builds on prior URI work on West Park Avenue, where eight bioswales were constructed and monitored in 2015. One of URI’s GreenSkills crews completed construction on the Newhallville bioswales in March 2016. These installations will serve as natural stormwater drainage basins, which will collect and filter stormwater runoff from the roadway and adjacent properties. New Haven engineers helped select these locations in Newhallville based on their upstream position in the sewer system, which allows for monitoring and may help reduce peak flows during large rain events that contribute to flooding downstream. This strategy for managing stormwater, called green infrastructure, has become increasingly popular throughout the country and New Haven is on the verge of implementing a large scale installation of these systems. In 2014, the City was awarded a federal grant to install approximately 200 of these rain gardens in the downtown area to reduce chronic flooding in the area around Union Train Station and improve water quality entering Long Island Sound. 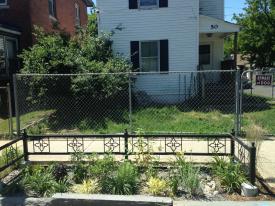 While New Haven has been able to reduce its point source pollution, which comes from identifiable locations such as industrial plants, there is still much work to be done in terms of non-point source pollution such as runoff from city streets and private properties. As rainwater lands on impervious surfaces such as roads, sidewalks, and roofs it becomes stormwater that runs as surface flow towards drains and catch basins and into the storm sewer system. On its way to the sewer, the runoff collects pollutants such at nutrients from fertilizers, contaminants associated with motor vehicles, and sediment. After entering the storm sewer system these pollutants are transported along with the stormwater to Long Island Sound, which reduces water quality and causes environmental degradation. Furthermore, during large storm events, the high stormwater flows cause severe flooding in the storm sewer system downstream. Green infrastructure strategies aim to mitigate these water quality challenges and reduce the impacts of flooding throughout New Haven.

EPA and National Fish and Wildlife Foundation awarded a grant to URI and the Yale School of Forestry and Environmental Studies (FES) to construct and monitor seven bioswales in Newhallville. Yale FES Professor Gaboury Benoit installed hydrologic monitoring instruments to measure the performance of the bioswales in reducing flow rates during storm events. Working with Professor Benoit, I have conducted water quality sampling during large storm events to analyze the effectiveness of the bioswales in reducing pollutant loads such as suspended solids, nitrate, total nitrogen, and orthophosphate. 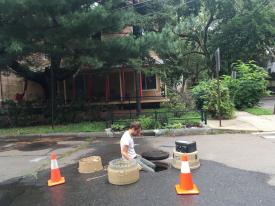 While the data are still being collected and processed, the initial outcomes confirm what was observed at the study sites on West Park Avenue results, which demonstrated that the bioswales were capable of removing over 75% of the stormwater runoff from the contributing drainage area. Preliminary results from the Newhallville sites show that the bioswales are capable of significantly reducing peak flows and - in some cases of small rain events - managing 100% of the runoff generated from the contributing drainage area. Samples for stormwater quality are still being analyzed to evaluate the bioswales’ performance for pollutant removal.  URI will post online the final research results from the Newhallville bioswales so the data will be available to the public. In addition, the City of New Haven will use the results from this study to inform design criteria, such as bioswale size and soil media composition, as they embark on installing approximately 200 bioswales in the downtown area starting in 2017.